Antipodes was borne from the discovery that a single line could be so fervently rich and meaningful both in its organic delivery and in its reflection. Antipodes are a form of poetry which can be read forward or backward word by word instead of line by line–which is the norm with reverse or tuanortsa poetry. Named after the term for direct opposites in geography, antipodes take a poetic approach to puzzle-piecing while maintaining the author’s voice.

When we talk of stolen sisters

This collection of Jessica Mehta’s powerful, beautiful, vulnerable work spans “from dates so long ago I can’t even recall” to her most current poetry in the midst of a pandemic. Her poems call our attention to the unsung disappearance of Indigenous women, the cultural genocide that still continues, the eating disorders that consume us from within, and to love, family, and the courageous choice to see the world from a different angle in the face of death.

Winner of The Birdy Poetry Prize—2020 “This Selected group of poems illuminates some harsh realities regarding identity. There are poems that smack a consciousness sideways. The poems have a real grit to them. For the reader, each poem will be an eye-opening experience.” –Poet/Professor Stanley E. Banks, Blue Beat Syncopation (Bookmark Press) “With sharp and incisive language, each piece provides an immersive moment, inviting the reader into the experience of growing up half Cherokee, of self-harm and losing friends, of teaching and aging and loving and living in the Pacific Northwest. Nothing is veiled, nothing is alluded to, and their humor is ever-present, wry and witty. Any writer who begins a poem with My psychologist says (don’t you love when poets start like this?) has levels of self-awareness and genre savvy that speak to years of dedication to identity and craft.” –Brenna Crotty, Editor, Selected Poems

College is supposed to be the best years of your life, a time when you “find your tribe.” But what does that mean for a first-generation, urban, indigenous young woman who stumbled into her freshman year to escape an abusive relationship? Armed with nothing more than piles of students loans from being deemed independent to the government due to abandonment by both parents, this is one indigenous girl’s journey through the most challenging set of obstacles yet … and finding herself in the process.

Bad Indian explores what it means to be Native American today through a series of raw, twisting poems imbued with a density of hope only survivors can realize. J.C. Mehta details the adversity of mixed ancestry, of what it means to be called a “Pretendian” by fellow Natives, and what a lifetime of being told “you look something” by everyone else brings to fruition—the realization of not fully belonging anywhere. Mehta delves into living with eating disorders, the victories and losses of loves great and small, and ultimately coming to terms and peace with her heritage. These poems are urgently needed, a buzzing meditation on finding your place in a hostile world.

Winner of the 2020 Reader Views Literary Award for most innovative collection of poetry in 2020, Savagery joins Mehta’s oeuvre as a reflection of what it means to be indigenous in today’s increasingly hostile, post-colonial America. Reflecting on self, place, and space and with strong confessional leanings, Savagery joins the ranks of other much-needed indigenous poetry of the era to provide a lens (and mirror) into indigenous issues and disparities while also providing a constant offering of hope. These poems are raw and very, very necessary.

Gimme the Familiars is a connected short story collection steeped in memoir. Each chapter begins with a “mini chapter” that’s a re-telling of a Native American myth. As a Cherokee writer, I included mostly Cherokee myths which were first told to me as a child. However, all are completely re-imagined, original work, and placed in a modern setting. The mini chapters are connected closely to each of the matching chapters, with the animals in the myths correlating to the monsters, heroes, and forgotten everyones we know in in our daily lives. (Ourselves included).

Drag Me Through the Mess 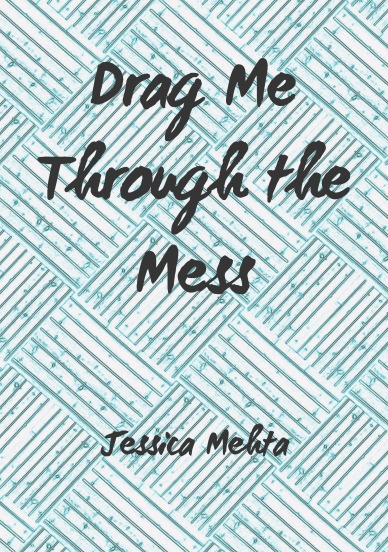 In Jessica Mehta’s tenth book, Drag Me Through the Mess uncovers what it means to be an indigenous woman in a society where “NDNs” are seen as fashion accessories at best and obsolete at worst. Each poem grips the reader and reveals a king of honest emotion and telling that’s almost unnerving. All the ugliness and hurts of life are explored with a kind of lyrical beauty that causes deep contrasts and juxtapositions. No matter the subject, readers will relate to the work and themes because at the heart of each is a shared experience.

Constellations of My Body 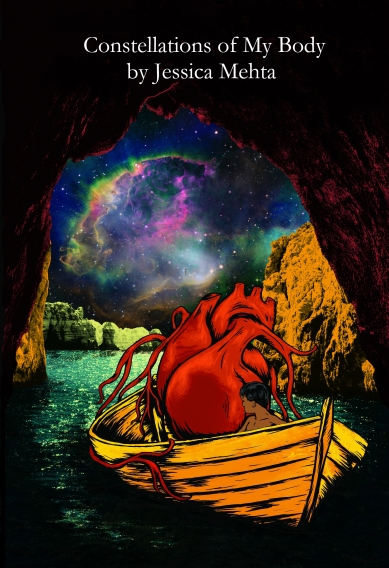 Jessica Mehta is a poet who writes without shame about body, race, and belonging. There’s both an unflinching boldness and an unexpected tenderness to the way she treats the rich cast within these pages — the ghosts of past selves, lost loves, and departed family. Constellations of My Body takes readers on an open-hearted journey through life’s fires asking what we inherit and what we make ourselves, what it means to be native, to be other, to feel lost and, ultimately, to belong.

Our bones are full of secrets—and, just like the rest of us, they’re desperate to spill. Secret-Telling Bones is Jessica Mehta’s fourth collection of poetry. Each piece has an identity that informs the next, thriving and living tissue that evolves with each new trauma. We’re often surprised at what seems to be genetic. From shame to selfishness, anorexia to self- destruction, Jessica’s words form the framework of a complicatedly beautiful world. It doesn’t matter whether we share similar stories or not. At the marrow level, the human experience is all the same. Jessica captures the breaks and cracks with a pulsing rhythm in her most recent collection.

The Wrong Kind of Indian

“You look something.” Jennifer had heard this her entire life as a “white-washed” half-Cherokee, half-white girl in a small Oregon town. The Wrong Kind of Indian is a thinly-veiled memoir-style story of what it means to claim your identity after a dysfunctional childhood steeped in sexuality and eventual homelessness, parents who toe the line between neglect and abuse, and the flailing that occurs when you don’t feel like you belong. Spanning the challenging bridge across 30 – from 27 to 34 years old – and set in the Pacific Northwest, Costa Rica and India, The Wrong Kind of Indian is a journey of cultural pride, self exploration, and search for love through Oregon, Costa Rica and India.

Jessica’s recall is so sensory, her imagination so rooted, her language so up front, and her sensibility so rounded, that she has no need of the merely fanciful. There is no glitz for looks here, no trading on fragility. This book will knock your socks off.  ―Marvin Bell, The Lamont Award of the Academy of American Poets Winner, Guggenheim Fellowship for Creative Arts

What Makes an Always

“Our rituals, those us habits, the unimportant is what makes an always.” Making an always isn’t like making a cake. A bed in the morning. A decision, good or bad. Jessica’s sophomore book of poetry explores the makings of an always―as a noun, of course. Five has long been an auspicious number in many cultures, from the five sacred mountains of China to the high five in western countries. What Makes an Always is an exploration of five different, yet complementary, aspects of the human experience we all share at various depths and times.  That’s what makes an always.

The Last Exotic Petting Zoo is Jessica’s debut poetry anthology comprised of twelve years of writing. A series of epochs, the reader is led down a spectrum of fragments in time saturated with loss, love and hope. Spanning several countries and facets of relationships, Jessica delves into the underbelly of familial strife and awakenings from a childhood with bi-racial parents to the loss of her father. Featuring glimpses into the reality of the relationship with the self, from infatuation to despite, key pieces dig in deep to the most incestuous relationship everyone has. Each piece segues seamlessly to the next, a love story told piece by piece until they become one unstoppable force-just as such stories are meant to be and always have been.

Contrary to popular lore, the author, a successful freelance writer, shows readers that an English degree can be both a practical and profitable gateway to earning a six-figure income. The manuscript is filled with useful tactics and tips, but it also makes clear that the reader’s own initiative and discipline are equally important to achieving successful results. 100 Ways to Make $100K with your English Degree isn’t a get rich quick scheme, a hack or a scam. It details numerous avenues for increasing your profits as a writer and English degree holder. Included are hard lessons others have already learned, such as which niche industries are most lucrative and why writers should never settle for an hourly or salary wage. 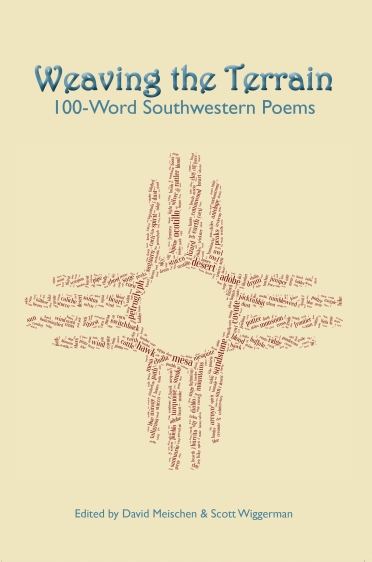 Weaving the Terrain: 100-Word Southwestern Poems is the third collection in a unique series from Dos Gatos Press, Poetry of the American Southwest. Each poem is exactly one hundred words, no more, no less. Within this restriction, however, you’ll find poems as varied as the landscape, the history, the people they evoke. Weaving the Terrain includes stunning prose poems and haibun, as well as poems in every shape made possible by a poet’s imagination and the hundred words chosen. Each poem is a concentrated gem on a topic related to the broad area known as the Southwest. Editors David Meischen and Scott Wiggerman have arranged 211 poems by 151 poets in eight engaging chapters.

We are Unchaste because we are damned if we do and damned if we don’t so we reclaim our words, work, and bodies through this artistic and linguistic endeavor. This anthology is based on the experiments of the Unchaste Readers Series, a west coast show that clings to a loose idea of creating and promoting art that takes risks and that shows the raw, vulnerable, ecstatic, complicated lives of women and gender non-binary folks and trans women and femmes—any of us who aren’t solely male-identified. This volume begins with challenging the tech boy belief in themselves as savior and ends with a call for Black Supremacy.

μtxt 3 (Microtext 3) is a collection of flash fiction and flash poetry — a genre Medusa’s Laugh Press refers to playfully as “microtext” (which is also how the first word of the title is pronounced). Like the first in the series, some pieces are quite brief, while others are made up of individual short components. Each copy of the book is hand-bound and fits in the palm of your hand.

This timely collection of poems speaks not just to the current political climate and the man who is responsible for its title, but to the stereotypes and expectations women have faced dating back to Eve, and to the long history of women resisting those limitations. The nasty women poets included here talk back to the men who created those limitations, honor foremothers who offered models of resistance and survival, rewrite myths, celebrate their own sexuality and bodies, and the girlhoods they survived. They sing, swear, swagger, and celebrate, and stake claim to life and art on their own terms.

Please visit the bibliography page for links to both print and digital journals.